I’m a newsroom ex-pat, a South Carolinian and first-generation college grad who grew up among soldiers and storytellers.

For nearly a quarter century, I worked as a writer, editor and columnist at the News & Record in Greensboro, N.C. During that time, I won more than two dozen local, state and national writing awards. Those awards, they were nice and all. I mean, you work on stories for days, weeks and sometimes months. You write, rewrite, report some more, fact-check constantly, walk away from it only to circle back around, read it one more time — out loud, of course — and call back someone to make sure what you heard them say is right.

Then, you get a certificate. And then … you start all over.

But it was never about the awards received. Ask any journalist. It’s about the stories discovered. At least for me. Still is. And the stories that stick with me the most are the ones I stumbled upon during my eight years working as an N&R columnist.

I wrote more than 1,200 columns in 100 months, and I chased stories across North Carolina. In doing so, I rediscovered my love for boiled peanuts — and a lot more.

During my time at the N&R, I spoke to community groups, lectured to college journalism classes and did my best impression of Anderson Cooper acting as a moderator for political forums. Never really liked that. Didn’t like the angry calls either, especially the ones I got during my time as a columnist.

You learn patience and the importance of grace during those conversations. But mostly, the angry calls I got over the years were left as messages on my answering machine early in the morning or late at night when readers knew I was nowhere close to my phone.

And some of those messages were just priceless. Like this one:

“Jeri Rowe, you make me sick!”

I still chase stories. Have to. But now, I do it as the senior writer at High Point University in High Point, N.C. I live in Greensboro with my wife, Katherine, and our two children, Will and Elizabeth.

And yes, I learn way more from them than they learn from me. 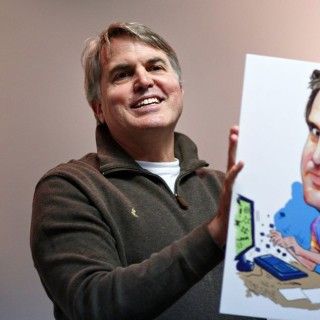